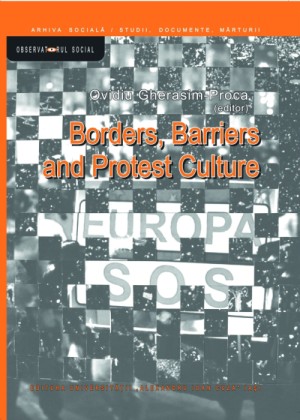 After 2008, economic recession has been accompanied by large-scale political transformations, conflicts and social movements. The protest movements for democracy and against social inequality have produced effects far beyond the boundaries of national politics. They have removed barriers to participation; they have ignored the borders between states. Unfortunately, new barriers have begun to replace the old ones.
The volume "Borders, Barriers and Protest Culture" explores social cleavages and political conflicts without the understanding of which the new barriers, whether physical or symbolic, at the border of the European Union or between the communities surrounded by them, would be difficult or impossible to explain. The dynamics of the contentious movements and the protest culture are used here as a revealer of the mechanisms of exclusion or segregation, of deep ideological divisions built over a long period of time.
Reflecting part of the knowledge produced within the framework of the research project "Borders, Barriers and Protest Culture. The New Politics of the Social Movements in Central and Eastern Europe" (which was developed as part of the PATTERNS Lectures international program through the collaboration between Alexandru Ioan Cuza University of Iasi and WUS Austria, with the support of ERSTE Foundation), the book intends to illustrate not just distinct points of view, but also collaborative-conversational practices, types of discourse, ways of interpreting political reality at the meeting point between social sciences, cultural studies, and critical theory. It outlines local reflections regarding the tensions of political and economic transition in Central and Eastern Europe, taking as a point of departure the circumstances experienced by Romania and neighboring countries.
Contributors: Emanuel Copilaș, Vasile Ernu, Ovidiu Gherasim-Proca, H.arta, Ruxandra Ivan, Tadej Kurepa, Diana Margarit, Nebojša Milikić, Vitalie Sprînceană, Ana Vilenica,
Read the publication in English, or in Romanian.